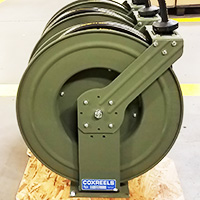 The use of commercial paints and aerosol sprays represent a severe danger to our United States military troops. Not only do these products offer no chemical protection, they also pose a significant threat by creating an infrared hotspot, potentially opening doors for an attack on our U.S. military personnel.

CARC paint is an option provided by select reel manufacturers. Many overlook the key benefits of CARC paint – it is much more than an active camouflage agent. The men and women of our U.S. military are undoubtedly worth the added protection that CARC paint provides.

Have questions? We are here for you. Please feel free to get in touch with us using the tabs and forms below to contact us and request more information about COXREELS® products and services. We will handle your inquiries and will get back to you as soon as we can.
Contact Us

Distributor information will be provided through your preferred method of contact. Click here to submit a request that will be routed to the appropriate distributor.
Find a Distributor
Web Design by BX3 Interactive
Copyright © 2016 - 2022 Coxreels, all rights reserved.
Tap to Call Tap to Email